This site was created by Oklahoma Reac3h Instructional Coaches in order to provide information to parents and educators.  The sample lesson plans and activities are intended to use as a guide in determining activities designed to promote phonological awareness.  Our goal is to provide both the definition of phonological awareness and stress the important role it plays in developing readers.

What is Phonological Awareness? 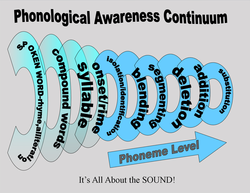 Phonological awareness skills in kindergarten children have been identified as one of the best indicators of reading achievement between kindergarten and second grade (NRP, 2000; Snow et al., 1998; Whitehurst & Lonigan, 2002) Children who are better at playing with rhymes, syllables and speech sounds often learn to read more quickly because these skills enable them to learn the alphabetic principle and to learn phonics. Conversely, children with underdeveloped phonological awareness skills in preschool are some of the poorest readers in later years because those students, in turn, have trouble learning to decode.